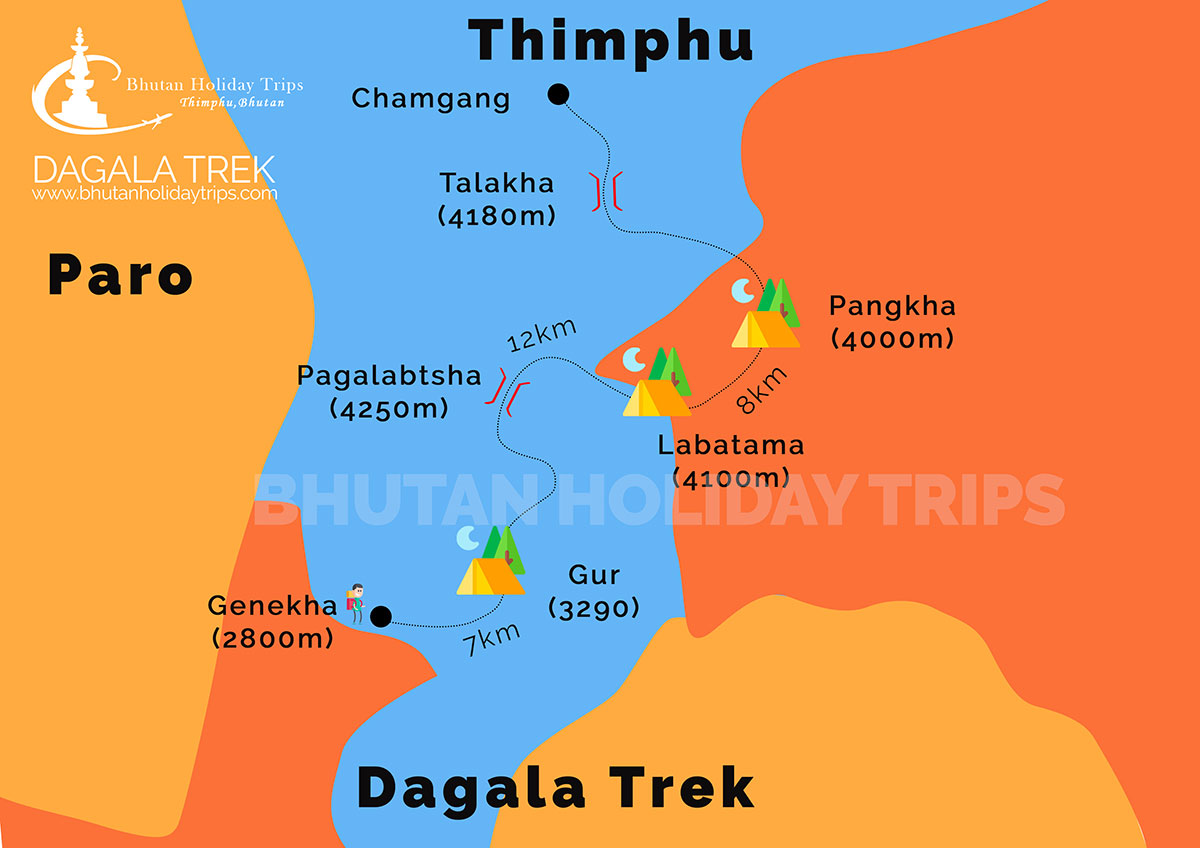 You will drive to your trek start point and then continue trailing along the river Geynitsang chhu and Dolunga chhu. You will start ascending through oak forests and might encounter some yak herder’s and woodcutters. At 3220m you will reach an exceptional lookout point. From here the climb is gentle moving towards the south going off the trail to Gur. You will camp among the yak pastures at 3290m.

You will go back to the main trail and climb through blue pines. Later there is a change in vegetation and you will be walking through spruces, dead firs and larches. At 4250m you will reach the Pagalabtsa pass after crossing several streams and traversing through birches and rhododendrons. From the pass, you can see the whole Dagala range. Further into the trek you will climb along a stream to Labatama at 4300m and camp near the Utsho lake where golden trouts are in abundance.

Today you will spend time exploring anyone of nearby lakes such as Relitsho, Hentsho, Setsho and Jagetsho lakes. The surrounding views are amazing. There is also an option to go take an excursion to the Jomo peak at 5050m. If you do not wish to go on excursions you can spend your day just relaxing.

Follow the trail along the Dajatsho lake till 4520m and enjoy the exotic views of Everest, Kanchenjunga, Masangang, Tiger Mountain, Tsendagang and Jichu Drake. Then the trail descends towards yak herder’s and dropping further to Dochha Chhu at 4200m. Finally you will cross over three ridges and reach Panka. You will camp here at an altitude of 4000m. <

You will start trekking to Talakha and pass Tale La at 4180m where you can spot the beautiful Dagala range and Thimphu in the faraway north. Descend through mixed forest of spruce, birch, juniper, rhododendron and bamboo. Finally at 3080m you will reach Talakha. Then you will descend further towards the village of Chamgang where your vehicle will be waiting to drive you to Thimphu.

Today after breakfast you will will visit the  King’s Memorial Chorten (built in memory of the third King of Bhutan); visit Buddha statue, and is presumed to be the largest Bronze statue in the world. The three storied high throne of the statue will consists of temples on each floor, visit Post office were you can personalize your stamp, nunnery temple,  Textile Museum, Traditional Paper Factory, the majestic Tashichhodzong. Overnight hotel in Thimphu.