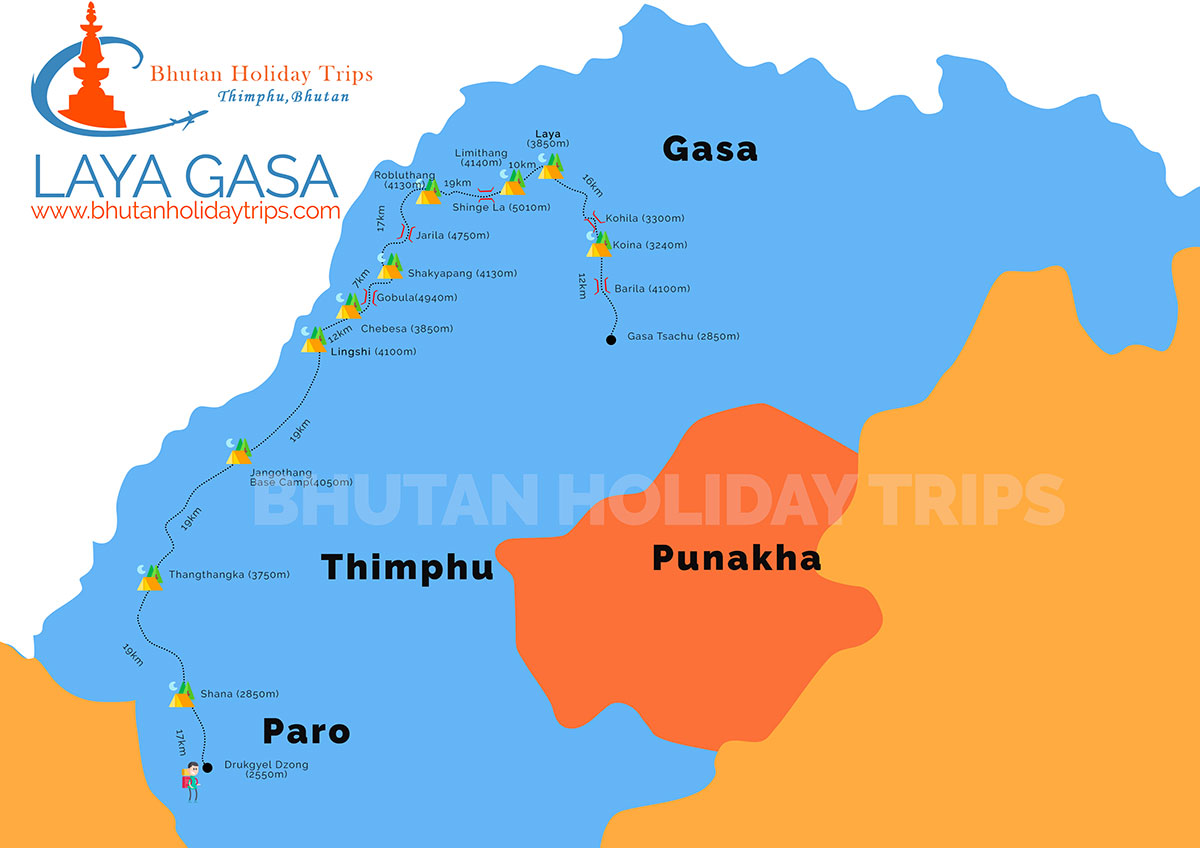 Walk along the dirt road through wide, rich, cultivated valley, beneath forest-covered mountains, following the Paro Chhu. You will encounter the first settlement comprising of big, magnificent traditional buildings with bright red chillies dried on their roofs in season. Not far from here, at Gunitsawa, you will pass army check point and your trekking permits will be checked and endorsed here. The Shana campsite is just half an hour walk from here.

Day 6: Explore of Jangothang(Jomolhari Base camp)

Rest day at Jhomolhari camp will help with acclimatisation as most people will feel the effects of ascending 1800m in three days. There are some good day hikes from the camp, and it is important to hike so that you will acclimatize. Follow the standard trek rule: trek high, sleep low.

It is a long climb to reach the first high and very windy pass of this trek, Nyile La pass(4890m). From the pass, you can get the views of overpowering mountains covered with snow. The route descends from the pass leading to a viewing point from which Lingshi Dzong can be seen in its full glory; a powerful, solitary structure in the middle of an enormous wilderness. Further 900m descend, you reach Lingshi camp. You can walk around Lingshi village and visit the Dzong.

The route from Lingshi to Chebisa is the most pleasant walk of the trek. The hillsides are partly roofed with medicinal plants. The route passes through a small pass and a village with few households. There is a Dzong in the village which was renovated in 2003 by the community. After visiting the Dzong, continue walking and Chebisa campsite is reached after crossing a little pass.

The track leading to a peak called Inela through the grassy slope of the village is rigid and vertical. On the way you might see herd of Himalayan Blue sheep, and possibly bearded vulture. The trail levels out and traverses a pass- Gombu La(4940m). From the pass, the greasy (sometimes) route descends towards the valley covered with Rhododendron forest. The trail passes some rock cliffs containing salt minerals and towards the end of the hike, the route descends through the forest on a wet trail to the valley of Shakyapasang campsite. The valley is one of the more stunning ones on the trek.

The day begins with a short climb and later levels and changes the direction. Watch for herd of Himalayan Blue sheep; snow leopard footprints have been spotted here. Jare la(4785m) is a small pass with several cairns and prayer flags, which marks the border between Lingshi and Laya for grazing Yaks. Jare la is a good viewing spot. You can see magnificent snow-capped Himalaya. Now the descent starts steeply snaking through Rhododendron bushes, Spruce, Larch, Silver Fir, Oak and various Pines and grassy slope all the way down to the valley. After crossing numerous rivers and swampy valleys you reach Robluthang campsite.

The trail crosses several streams and a pass Sinche la(5000m). The trail is more of zigzag, grassy and slippery till the end. The trail gets you through glacial valley and yak pasture lands, and the lowest point in the horizon as well. The hillsides are roofed with medicinal plants “Rheum nobile” and there is possibility of seeing Blue sheep. The route offers great views of five Bhutan Himalayas ranging from 4617m to 7194m above sea level. From here, continue descending through some huts until you reach sandy place next to a moraine. 20 minutes after crossing a bridge, Limithang campsite is reached walking through beautiful Cedar forest.

The route crosses several streams, Cedar and Fir forest with an immense view of the Great Tiger Mountain. After some small ups and downs and crossing a ridge you reach a Chorten and prosperous Laya village with Tsenda Gang Peak in the distance to the northeast. Laya geog has six villages and it is part of the Jigme Dorji National Park.

Walk around Laya village, it’s a worthwhile. You can visit some of the houses and the hosts will be happy to have a guest, but watch out for dogs! There is a school in the village and few Temples were you can visit. If you feel little adventurous, go for Yak riding! Apparently there are more than 20 yaks that are safe enough. There are some good hikes from Laya.

Walk through the pasture and houses towards the village access and pass through some beautiful woodland. The trekking permits are checked at the army check point called “Take Hankhar.” After the army camp, the trail is good and it descends till the bottom of the valley. From the valley, the trail is good, wide and flat following Mo Chhu. Two massive caves are met on the way while climbing. At the end of the final climb, the trail provides a good view of Koina Chhu and the Koina campsite. The campsite is muddy and there is a hut and appropriate toilets, which is clean and well looked after by a caretaker.

Start the day with a trail through sub-tropical forest passing Georges and if the atmosphere becomes hazy, the canyon transforms into something out of a folk tale. On the other side of the canyon is one of the few places in the world where the Snow Leopard and Tigers use the same province. After 3hr of climbing gains Bale La(3900m), the last pass on this trek, and now the trail gradually descends till Gasa. Kang Bum Mountain can be seen through cane forest. There are few shops in the centre of the one-street village. One hour steep descends from Gasa leads to the Gasa campsite near the Hot Springs.

Explore the village and visit the Gasa Dzong. Zhabdrung Ngawang Namgyal established this Dzong in the 17th century to protect the valley against Tibetan invaders. He was the first religious King of Bhutan. After your visit, descend to Gasa Tshachu (hot spring) to enjoy a hot relaxing bath in one of the springs. The Gasa Tshachu is the most popular hot spring in Bhutan. This is truly the place to unwind after the long trek.

After breakfast, you will drive the descending road taking you through heavily forested areas with wild orchids in abundance. You will then arrive at Damji Village which lies at an altitude of 2,400m. Continue downhill where you will be pleased to see high agricultural benches, luxuriant semi-tropical gorge with banana trees and creepers aplenty. You will follow the Mo Chhu through the thick forest till you reach Tashithang (1,620m) and then further down for 15km where you will arrive to Punakha. Later in the afternoon, visit to Chimi Lhakhang, which is a fertility temple. After Lunch you will visit the Punakha Dzong, which is stunningly situated inbetween the male and female rivers like an anchored ship. Overnight hotel in Punakha.

Today after breakfast you will drive to Thimphu, capital city of Bhutan with the stop at Dochula pass for Tea. On the way, visit the new Druk Wangyal Monastery, which is the only of its kind in the country with elaborate paintings depicting the lineage of the present monarchy and their visionary works.On a clear day you will the spectacular of the Himalayas. Later in the afternoon you will visit the  King’s Memorial Chorten (built in memory of the third King of Bhutan); visit Buddha statue, and is presumed to be the largest Bronze statue in the world. The three storied high throne of the statue will consists of temples on each floor, visit Post office were you can personalize your stamp,  Traditional Paper Factory, the majestic Tashichhodzong. Overnight hotel in Thimphu.