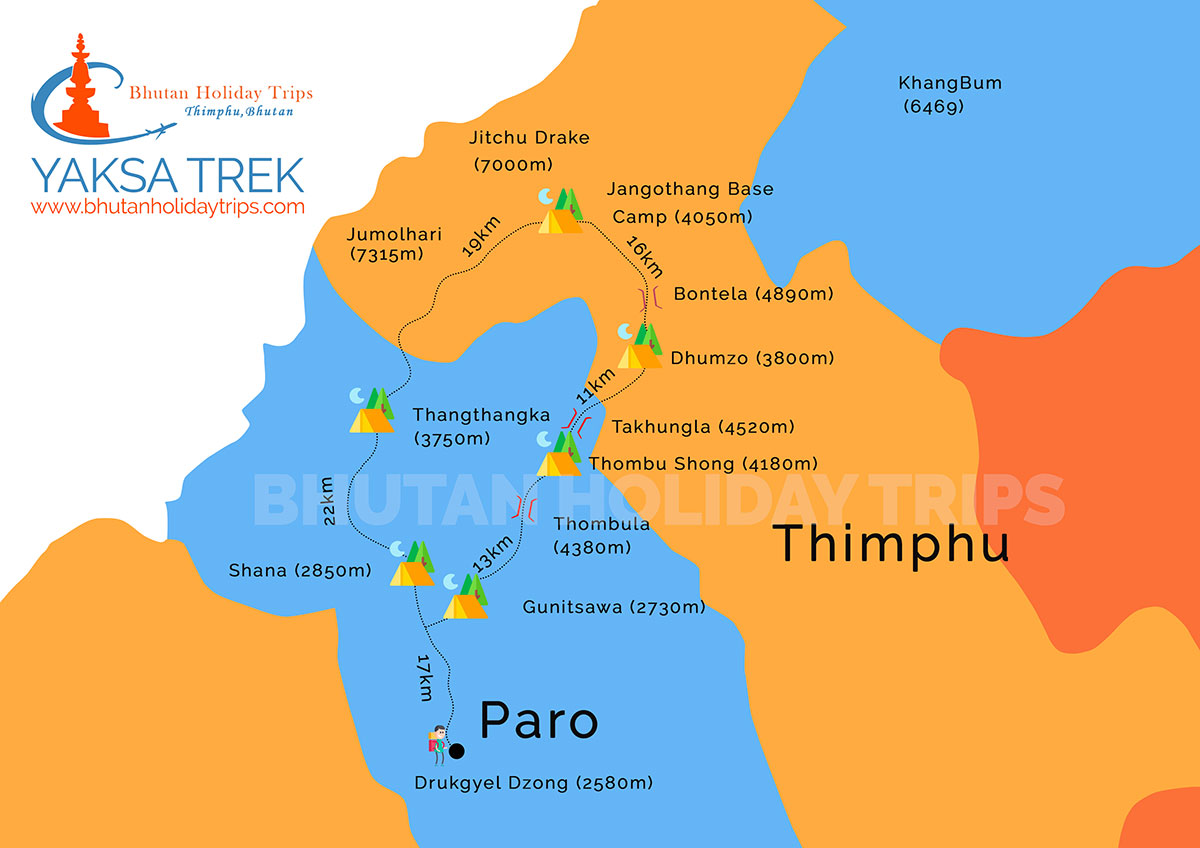 During the journey, one will experience breath-taking view of Mount Everest, Kanchenjunga and other famous Himalayan peaks including the sacred Jumolhari and Mount Jichu Drake in Bhutan. On arrival at Paro International Airport, you will be received by your guide and transfer you to the Hotel.  Later in the afternoon you will visit Paro Dzong. It was built in 17th century and now houses government offices and religious institutions. Then you will visit Kichu Lhakhang, the oldest temple in the country built by the Tibetan King Songtsen Gampo in 8th century. In the evening you can stroll in the paro town. Overnight hotel in Paro.

Walk along the dirt road through wide, rich, cultivated valley, beneath forest-covered mountains, following the Paro Chhu. You will encounter the first settlement comprising of big, magnificent traditional buildings with bright red chillies dried on their roofs in season. Not far from here, at Gunitsawa, you will pass army check point and your trekking permits will be checked and endorsed here. The Shana campsite is just half an hour walk from the check point.

You will witness the Mountain Festival for two days. The celebration commences with a welcome dance and local song by the Soe community. The stalls will then be opened allowing you to walk around and witness the exhibition made by the local communities. This will then be followed by a yak and horse show. Yak riding, horse riding, Khuru and shotput contests will begin after lunch. A play about the conservation of Snow leopards and a snow leopard dance will also be performed. You will then hike back to the Jangothang base camp in the evening.

On the 2nd day, you will partake in a trek in Soe guided by the locals. After lunch, you can watch the various folk performances and experience the traditional handicrafts showcase of these local communities.

The trail leads north to the last settlement in the valley and descends once again to the Paro Chhu (River), crossing it on a wooden bridge. Walk up to the torquies Tshophu lake (4380 meters), which is inhabited by ruddy shelducks. You will come across a second lake after you climb across a slope to a crest. Then descend into a hidden valley and climb steeply to Bonte La at 4890m, the highest point of the trek with great mountain views of Basingthang (5500m) and Chatarake (5570m). After the pass, the trail descends crisscrossing yak trails down to the Dhumzo Chhu and after walking downstream past few houses you arrive at a camp at 3800 meters.

Climbing from the camp through Rhododendron, Birch and oak forest decorated with moss leads to a grazing land. Cross the meadow on a good trail above the river leading to a chorten, huge cliff appears with the Sey Dzong wedged in it. After descending and ascending through the forest and a flat trail roofed with Rhododendron bushes, Tagulun La(4540m) becomes visible on the skyline. The views of glorious peaks like Jhomolhari, Jitchu Drakey and Tsheri Kang, and in the distance Kanchenjunga and Makalu can be seen blocking the view to Mount Everest. From the pass, the trail winds gently downhill to a lush Thangbue valley. Thangbue camp is the second highest camp for the trek.

Walk through the marshy valley to find a clear trail through Rhododendron bushes towards Thombu La. From the pass you can see snowy peaks of Bhutan, Sikkim, Nepal and Tibet. The walk from the pass is one of the best of the trek with a beautiful view through a hillside roofed with Edelweiss. The camp is near the helipad, a pleasing site by the Paro chhu.

After breakfast, we retrace back through blue pine forests down stream Paro Chhu River, farm houses, rice fields, small human settlements to Drugyal Dzong. Your car will be waiting here to transfer you to hotel.

Highest ascent of the trek: 900m