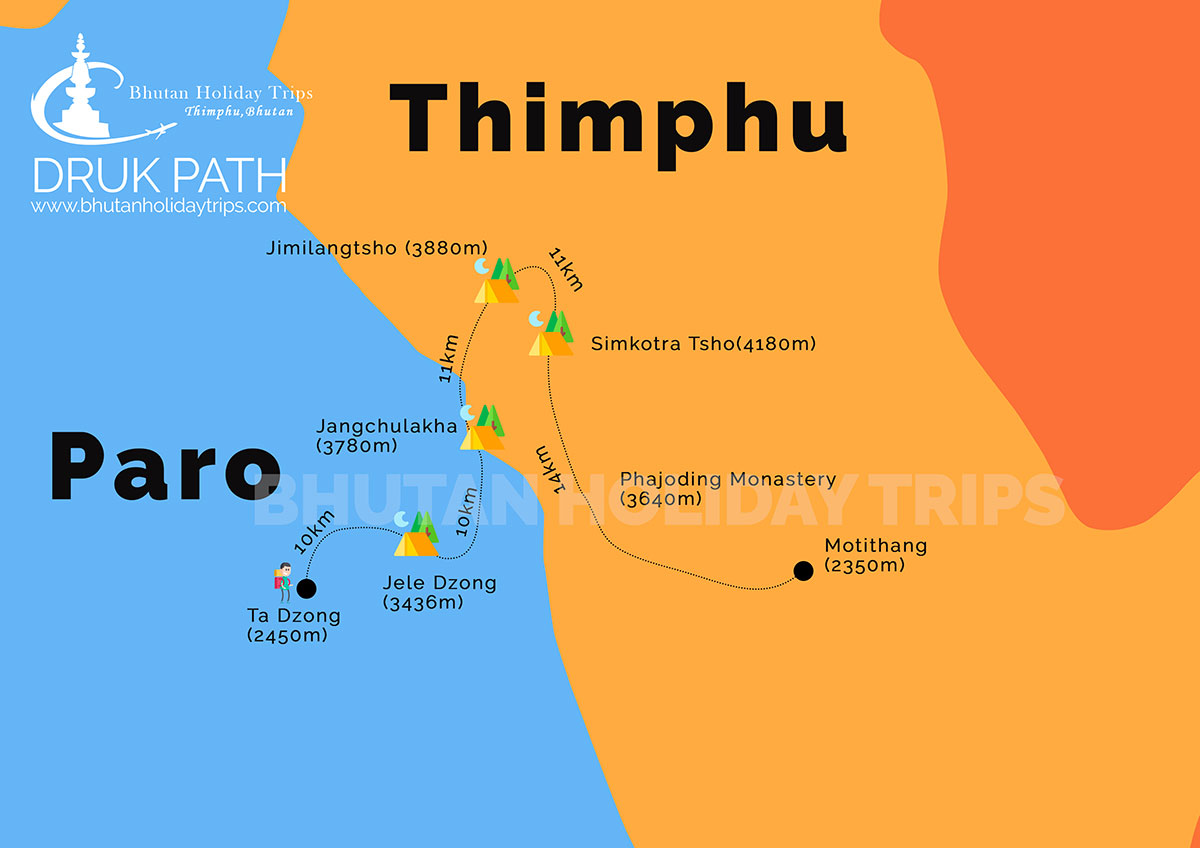 The track starts from Ta Dzong (National Museum). The first day could be quite strenuous as the track climbs non-stop for over 1,065 m. Following the gravel road passing few farmhouses and apple orchards, the trail passes through Pine forest and after firm climbing, there will be nice views of Paro valley, and Jele Dzong above the ridge. Continue walking through the trail and just before reaching a small pass, the campsite is a little way down from the pass.

After climbing steeply for a while the slop evens a bit and the ascent is more gradual. The trail provides beautiful views of Paro valley and Dagala range (another trekking area). The route passes through forest that was damaged by Bark Beetles in 1980’s. The campsite “Tshokam” is 4 hrs away from here.

The track crosses two small pass and provides stunning views of snow-capped Mt. Jomolhari to the north and a number of monasteries of Paro down below. On the reverse side there is a view of Jimilang Tsho. The route comes across many small lakes with promising campsites, but the best is near Jimilang Tsho. The lake is known for its enormous size Trout. We can organize catch and release fishing permit at your service.

The route takes around the lake to its far end. There is some steep climbing through the bushes and dwarf Rhododendron allowing good views later. From here you can see a lake below, a pleasant campsite, which may be occupied by Yak herders. The route comes through many small lakes including male and female. The campsite is close to Simkotra Tsho which has some stone ruins nearby, making the camp gorgeous.

Today you will have a long climb past three false summits and descent towards a camping place and ascend to Labana La at 4235m. From this altitude you will start descending towards the Thimphu valley with stunning views of Jumolhari and Dochu La. If the weather is clear you should also be able to see Gangkhar Puensum and other Himalayan peaks. Then you will descent through juniper trees towards Phajoding and walk further down until you arrive at Sangaygang on the outskirts of Thimphu.

Have breakfast and then get on with the day’s sightseeing to the King’s Memorial Chorten, majestic Tashichhodzong and Kuenselphodrang, the giant Buddha statue. Then you will head to the nunnery temple and Textile Museum. If it is the weekend you will catch a busy weekend market at the bank of Thimphu River where people from nearby villages come here to sell their farm products. You can stroll through the market to see the variety of food of the country, including basket upon basket of fiery chilies, fresh cheese, and mangoes. In addition, many stalls contain Bhutanese handicrafts and household items. It’s fun to wander the aisle, taking in the bustling atmosphere of the market. Perhaps this market scene offers wonderful opportunity for photographs and to mingle with local people. Overnight hotel in Thimphu.